Alison Kriel delights with stories of pupils past, present and future and demonstrates her uniquely empathetic approach to all aspects of her work.

Alison was born in South Africa and as a child attended schools in various African countries, as well as Ireland and England. She has always taught in Hackney schools because she loves the diversity of the community. Alison was the founder head teacher of Betty Layward School. As headteacher, she managed its development from a 90 pupil Early Years school to a very popular and successful 2 form entry primary school for 470 pupils.

Alison joined Northwold School in 2008, initially as an interim post to support it during some challenging times and to prepare it for an overdue Ofsted inspection. She became the substantive headteacher in 2009. When Alison took over Northwold there was only 50% permanent staff, 64% staffing attendance, a falling pupil roll and the school was one of the lowest achieving schools in the country. Under Alison’s leadership, the school has a full list of permanent staff members with 98% attendance, an oversubscribed pupil roll, is the highest performing school in Hackney, is in the top 3 in London and the national top 100. Northwold is a Gold Club member, a national Pupil Premium and SSAT award winner.

Alison’s leadership skills have consistently been described as outstanding by Ofsted.  She is the founder executive principal for a new Multi Academy Trust called “Amaya Trust” which converted on 1st April 2015.

We covered so many topics during this conversation and we could have easily spoken for at least another hour.

Some of the key themes and topics from our conversation include: 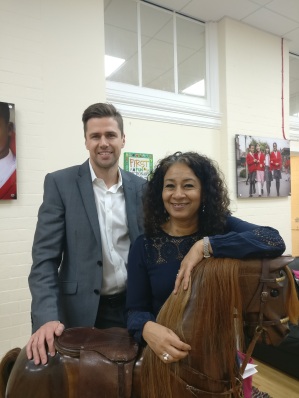 There are so many gems of wisdom crammed into the next 75 minutes that this list could be ten times longer. I always take great pleasure in spending time with Alison and I hope that you feel the same whilst listening to our conversation.

Grab yourself a coffee, a notebook and enjoy!

Listen to this episode on iTunes